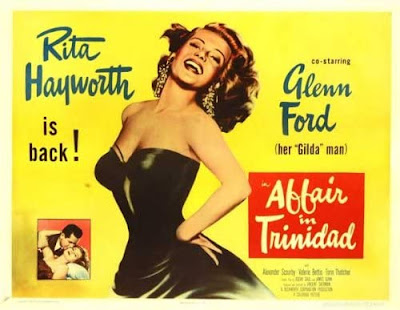 Lest you think things have gone loopy with the numbering of Nate's Quarantine Quapsules,I have not.  Nate didn't start sending me the capsules until he had reached number 5.  In order to keep the set complete I'm posting the first four over the next couple days as bonus pieces.

The first ten minutes of Vincent Sherman’s Affair in Trinidad are one of the great fake-outs of 50s Hollywood cinema. Six years after Rita Hayworth and Glenn Ford made Hollywood magic in the timeless noir Gilda (1946), they reunited for what at first glance appears to be a better-late-than-never victory lap. The first scene sees Hayworth in a nightclub, singing and dancing a shockingly risqué (for the early 50s) calypso number, flashing more bare legs than a line of can-can dancers while her strapless bustier proves more stubbornly defiant of gravity than Anita Ekberg’s sweetheart neckline during the Fontana di Trevi scene in Fellini’s La Dolce Vita (1960). Sherman even gives a knowing nod to Gilda’s most famous moment—Hayworth’s infamous head pop/hair flip into the frame for her introduction—with a quick close-up hair toss near the start of the dance. Could this film be a greatest hits of Gilda, we wonder?

Alas, it’s not to be. Immediately after this show-stopping number Affair in Trinidad reveals its true colors as an idiot rip-off of Alfred Hitchcock’s Notorious (1946): it follows a woman forced by government authorities local cops to infiltrate a group of ex-Nazi expats living in Brazil Trinidad and Tobago by faking romantic interest in their leader while actually falling in love with a different man, all of which leads to a climactic party sequence where she steals valuable information and escapes down a staircase narrowly misses getting killed on a staircase.

I call it an idiot ripoff because everyone in the film acts like a total and complete ignoramus the whole time, best demonstrated in a scene where Ford, the brother of a man murdered by de facto ex-Nazi leader Max Fabian (Alexander Scourby), barges into his home, waves damning evidence in his face, and…sticks around. (The longer the film goes on the more and more one develops an intense kinship with Juanita Moore’s Dominique, the West Indian housekeeper of Ford’s brother’s estate who can barely hide her exasperation with all the stupid white people running around her islands.)

Only Hayworth seems to be trying here; the usually dependable Ford is a charisma sinkhole who’s not so much stoic as non-responsive and non-reactive. When we see them fall in love, we see the mechanics of a hackneyed script, not a believable story development.
Posted by Steve Kopian at May 07, 2020