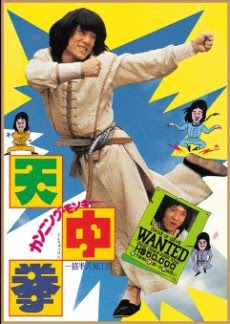 1978 was the year Jackie Chan went from being a minor studio player to an international superstar. In March he starred in Yuen Woo-ping’s Snake in the Eagle’s Shadow, the first of his films that stopped trying to make him a Bruce Lee clone and instead embraced his acrobatic and irreverent style of comedic kung fu. In October, Yuen and Chan reunited for Drunken Master, the film that arguably perfected the Jackie Chan formula. But nestled between those two films’s releases is Chen Chi-hwa’s Half a Loaf of Kung Fu.

If Chan’s most successful comedies saw him blending martial arts with slapstick silent film stunts à la Buster Keaton, then Half a Loaf channels instead the madcap zaniness and kineticism of Looney Tunes. Consider the opening credits montage. In many wuxia of the era, the credits would play over shots of the lead actor performing kung fu routines in an empty studio. Here, Chan instead acts out a series of 10-15 second comedic vignettes with a group of extras. (The most absurd sees Chan pinned to a wall by enemy knives while posing like a crucified Jesus as a musical stinger from Andrew Lloyd Webber’s Jesus Christ Superstar blares!!)

The rest of the film is just as inexplicable in its selection of gags and set pieces. Most of it sees Chen grasping at straws for what to throw at the audience next, and indeed for most of the run-time it seems like Chan’s wondering through two or three different movies at once. He runs into several secret kung fu experts, multiple femme fatales, joins or leaves several different clans—the Wu Tang Clan is mentioned in one scene but never shows up, proving that while they may be for the children they’re not for terrible movies—and gets into lots of fights with combatants of perpetually shifting allegiances. Eventually the disparate plot threads collide in the last twenty minutes for a brawl that felt less like a climactic showdown than a recreation of the news teams fight in Adam McKay’s Anchorman (2004). The film’s only bright spot is this fight which, while ridiculous, still manages some inspired choreography, particularly a sequence where Chan frantically studies new moves from a kung fu manual while sparring with the lead villain. It seems Half a Loaf of Kung Fu is half a loaf short from being a good movie.
Posted by Steve Kopian at May 07, 2020