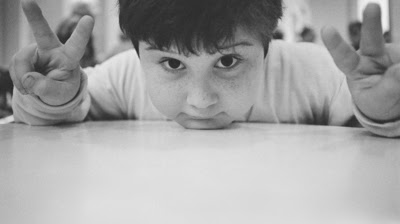 REWIND will crush you…and lift you. Sasha Joseph Neulinger‘s recounting of the molestation that he and his sister suffered at the hands of their uncles and cousin is a stunning experience. I mean that in the sense that it is as if you have been hit with a large mallet and don’t know where you are sort of thing. It was one of the few films where the audience at the critics screening sat bolt upright not moving and not making a sound. When it ended we kind of sat there a moment or two in stunned silence before we wandered out into a world that had changed.

The film is made up of interviews with Neulinger‘s father, mother, and sister as well as tons of home video shot over the years of abuse that reveals the changes in Neulinger and his sister. It’s a decent into hell and back as we follow what happens as the abuse runs its course, ending when Neulinger comes forward to protect his sister. That may sound like I’m telling you too much, but I’m not because know what happens isn’t the same as living it.

I really don’t know what to say, but this film will kick you to the curb. And if you’ve ever had something like this happen it will kick up stuff that you may not want kicked up.

Highly recommended.
Posted by Steve Kopian at May 04, 2020