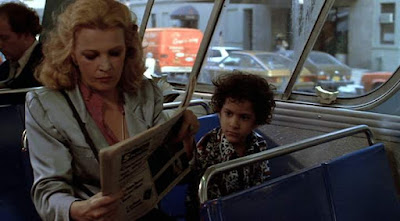 It’s easy to see why the Safdie Brothers personally swear by John Cassavetes’ Gloria (1980), as the first twenty minutes lay out the playbook they’ve been using their entire careers. We watch a family trapped in a squalid South Bronx apartment panic as they try to save their children from a mafia hit they know is imminent. It’s all jagged, nerve-shredding tension as the characters flail about like cornered animals, yelling and arguing with each other. Finally the parents pass their youngest son Phil (John Adames) off to friend and neighbor Gloria Swenson (Gena Rowlands) who reluctantly scuttles him over to her room. The music swells to a deafening pitch and the family’s windows are blown out by fatal shotgun blasts. Now the two go on the run from the mob who wants the boy dead, unable to trust the law, unable to disappear into the underworld. Throw in a penchant for unusual New York location shooting, deglamorized gangsters, and a strong undercurrent of familial angst and you have all the ingredients bubbling in the Safdies’ pot.

Yet Gloria remains a film uniquely its own, impervious to copycats. Other films can mimic its style and story, but what they can’t replicate is the chemistry between its leads: Gloria, the reluctant mother, and Phil, the reluctant son. That Cassavetes coaxes a show-stopping performance from his wife Rowlands is hardly a surprise—the two had already spent decades making some of the most superbly acted American films of their era. And here in Gloria we see Rowlands stretch herself from her most manic to her most coolly controlled.

But the true revelation is Adames. Who is this child? Where did he come from? Why does he only have one acting credit on IMDb? And why didn’t he immediately become a star? Though not even old enough to see over the deli counter, he acts and talks like a tough guy would in one of Cassavetes’ other films, full of streetwise braggadocio with a swagger to match. But he’s never impetuous like a little boy trying (and failing) to act tough. This is a traumatized child who has realized his childhood is over and must become a man. So he plays the part the best his upbringing has prepared him. It’s one of the most perfectly realized performances in Cassavetes’ entire oeuvre, and it has a perfectly realized film to match.
Posted by Steve Kopian at May 04, 2020