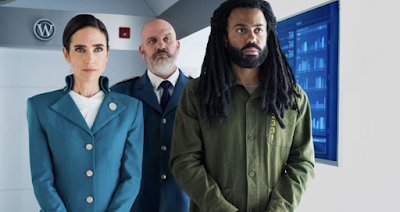 SNOWPIERECER was originally a graphic novel series created by Jacques Lob and Jean-Marc Rochette. It concerned a train that raced around a frozen earth. The world was frozen when the effort to stop global warming cause the world to freeze to 119 degrees or more below zero.  The series follows what happened on the train called Snowpierecer. It eventually spun off into tales of plague and a second train.

The idea of a frozen world and a train was used as an action thriller/exploration of class by Oscar winner Bong Joon-ho for a feature film. Little beyond that basic idea really transferred over to the big screen.

Now American TV channel TNT has taken the ideas in both the novel and the film and turned it into a two season TV series with 10 episodes in each season.

TNT originally made the first four episodes available to screen to start. The episodes are set up as a murder mystery which are used as the excuse to layout the world of the train.  As a result there is a lot of exposition into thing we really didn't need to know right now but it fills in the world and acts as a kind of filler for some of the episodes.

The language is course and in the screeners I was given uncensored. The violence is bloody since most of it is via knives or axes or metal bars. It is not for the faint of heart since they don't cut away so we see as limbs are severed and blood flows. That doesn't include what happens should you go outside.

I'm going to give you my thoughts on each of the four episodes below but some general thoughts at the start.

First and foremost the series is not the graphic novel nor the movie. Some of it was lifted from them but this is it's own beast. Don't look for characters to have analogs to the earlier material.

While it is going to be hard to know where the series will go over the remaining episodes the series is an entertaining mix of science fiction, crime drama and soap opera. I would happily have continued on watching the series had more episodes were made available.

That said I saw the episodes some four weeks ago which means by the time the series catches up to where I left off a full nine weeks will have passed. I'm not sure how that much time will affect my going back to it. (then again episode 4 ends on one hell of a cliff hanger)

The series suffers from the same logic and science problems that the earlier iterations did, though perhaps in a slightly worse way  in that we get to see more the train and the world and we're left with more chances to question.  The why's and hows of the cars are used make no real sense, such a single car for things like cattle- you would need more to feed the people on the train (Then again lets not talk science)

We don't know basic things like how big is the train physically? We know it it a thousand cars long but how tall is it? Each car appears to be three stories tall. We don't know how they built an around the world track or other things. I know some of the questions maybe answered but they shows us things that make us question.

While I like the series it requires us to majorly suspend disbelief. It not only breaks but tramples on Raymond Chandler's notion that you can ask an audience to believe one impossible thing per story (maybe two if you do it right) because life has unexpected turns but the more cracks in logic you have, the less the audience will go with you.  There is a lot we have to just go with, and we do. But science fiction is not fantasy where it can be all magiced away. If you think about it too hard things are going to crumble.

I freely admit they may explain it all- but for now while there are good characters and compelling situations, the world it operates in has issues.

Should you watch the series? Yes. if it interests you most certainly. I had a blast despite my reservations.

Okay at this point you can just stop reading and go and watch the series or you can read on for some plot details (and maybe a small spoiler or two).

What follows are the short pieces I wrote slightly edited that I wrote after each of the first four episodes. They are intentionally vague since I am not going to lay out the whole story- leave that to the bloggers who make a fortune writing up the episodes you just watched.

Set up. It lays out the world and the train as Layton (Daveed Diggs) is dragged from the tail to the front. He's the only homicide detective in the world and there has been a murder. The trouble is the murder is exactly like one that happened a year earlier and they caught that killer....or so they thought. Needing to solve the crime Layton is forced into service. However his buddies in the tail think he's turned on them...

It takes most of the episode to click as the whole world of the train is laid out in one fell swoop. We get a sense of everything and most of the major characters over the course of the episode's run time. Its a risky gamble since the sense is "get on with it"is really strong for most of the episode. Personally it ultimately worked since the final 8 minutes it all comes together and sends the series off. My question is going to be will it be enough for everyone to come back next week? I say this because I was given the first four episodes to watch at one time so I could keep going.

As I write this I have just seen the first episode but I am looking forward to the next three and I want to see what happens next- though I have no clue how this will lay out for 20 episodes over 2 seasons. (The murder mystery according to the write ups is only the first 4)

I have to add that Daveed Diggs is excellent and his performance is worthy of an Emmy. The sequence where eating soup and a sandwich for the first time in years is magical.

Episode 2
After the aftermath of the end of the first episode the investigation goes forward. Complication  arise as Layton finds out part of the reasoning behind the murders. And things get dicey when a possible extinction event hits the train

If you saw the first episode you'll be in for the ride of the second. The ride is a tad uneven as the film both wants to show us more of the train while keeping the investigation going.

More glaringly the series begins to show signs of cracking from logic problems such as people having funky party gear (Wings and gas masks- where do they keep it?) and why the train is set up a certain way- such as only having a single car for things like meat and butchers, since its not only a question of what if something happens but also reminds us that that simply isn't enough for all the people even in the forward part of the train. (forgive me I can't do the reveal)

Episode 3
A reason for the latest murder is revealed. The class war heats up, the damage to the train is assessed and many people consider just cutting off the tail and the tailies

The show seems to be finding a direction. There is a sense it is setting the stage for things down the road. At the same time the mix of a tidbits and not as much forward motion is a tad frustrating. I'm also beginning to feel slightly adrift by massive amount of faces. How many characters are they giving us?

The revelation of the killer had me looking at the screen kind of side ways since his bludgoning all these people makes me wonder...about things like security cameras.

I love how Till quietly becomes more and more a rounded character and a cop.

Episode 4
The murder is solved and things get interesting with one hell of an unexpected ending....
But at the same time we realize that its going to a messy world that makes zero sense (there are still telephone poles and cables out side?) but its interesting

(For the record, I have seen Episode 5 but any word on that episode is embargoed until the episode airs)
Posted by Steve Kopian at May 10, 2020

Email ThisBlogThis!Share to TwitterShare to FacebookShare to Pinterest
Labels: made-for-tv