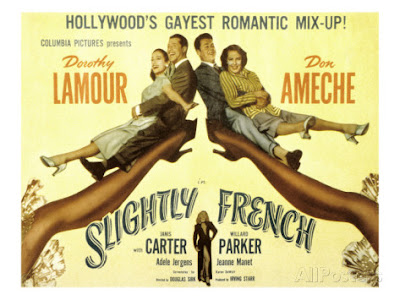 On the surface Douglas Sirk’s Slightly French seems a simple Hollywood riff on George Bernard Shaw’s Pygmalion. After driving the French star of his latest film to exhaustion, big-shot director John Gayle (Don Ameche) scrambles to find a suitable replacement for his Gallic leading lady. While taking a break at a carnival, he stumbles upon Mary O’Leary (Dorothy Lamour), a sideshow singer who performs as women of different ethnicities in different shows. First she’s a Brazilian samba dancer, then a Chinese “wallflowel,” and then—a ha!—a French dancer. (Thankfully we’re spared her presumed turn as Nia from Kenya. It was the forties after all, so the likelihood of seeing a major Hollywood star in blackface was still tragically more than zero percent.) In a moment of inspiration, he persuades Mary to quit the carnival, join his movie, and reinvent herself as “Rochelle Olivia,” French actress of stage and screen. The only catch: his imperious studio boss insists the replacement actress really be French, so Mary’s transformation has to be so total nobody can suspect she’s American carny trash.

Sirk takes the kind of pleasure only a European émigré could have in molding an American character into the image of European sophistication and glamour. Fellow German transplant Ernst Lubitsch indulged a similar fantasy with his greatly under-appreciated film The Oyster Princess (1919). But whereas Lubitsch demonstrated contempt for his American upstart, Sirk understood that such aping of old world mannerisms was the name of the game for the chameleonic Hollywood, particularly for his star Lamour, the “Sarong Queen” whose career largely revolved around playing women of, ahem, dubious ethnicity. But from this breezy comedy emerges a sinister undercurrent, one that argues that Gayle—and by extension all creative men in Hollywood—are worthless without the women they form into the shape of their own images. Much like the Shavian Galatea who rejected her Pygmalion for his coldness and cruelty, O’Leary/Olivia casts off Gayle for his presumption that she needed him instead of the other way around. (That they reunite seems more a concession to the Hollywood demand for a traditionally happy ending than it does directorial conviction.)

In any case, Slightly French is both gorgeous and charming, with deliciously crisp cinematography, a crackling script, and a song-and-dance sequence equal to any of the musicals of its era. And, of course, Lamour brings the house down.
Posted by Steve Kopian at May 10, 2020