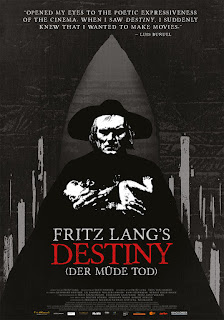 Influential film by Fritz Lang was said to be the film that made Hitchcock and Bunuel's interested in the possibilities of film.

Death takes the lover of a young woman. She pleads with him to return her love. After first failing to find anyone to trade places with the dead man she is offered three chances to save the love in each tale, one is set in Arabia, one in Venice and the third in China.

Haunting example of what silent films could be the film influenced not only film makers but films themselves as Douglas Fairbanks bought the rights to the film and raided it for his THIEF OF BAGDAD. This is a film that ends up haunting your dreams and your waking thoughts.

To be honest I find this film hard to discuss. Not for any rational reason, but more because the film always seems to be some sort of waking dream for me. Despite seeing the film multiple times over the years it never hangs with me as other films do but instead gets filed away to the part of my brain where dreams are stored.

While very much the work of Fritz Lang who was starting a run of work almost unmatched in cinema (this was followed by DR MABUSE, DIE NIBELUNGEN, METROPOLIS,SPIES,  WOMAN IN THE MOON,  M, TESTAMENT OF DR MABUSE) the film feels as though it is a blood brother to Muranu's NOSFERATU which was released the next year. There is something about the sense of dread in both, not to mention similar style that makes the films seem related

To be honest there is little I can really say about the film outside of saying that anyone with any sort of love for film must see it. Its not just a matter of the history but the effect that it produces that has to be experienced at least once in every film goers life. I know that this isn't a true review but some times Unseen has to revert to what it was set up to be- namely a pointer for cinematic treasures that are worth seeing.'

The film plays at KINO on April 3 with a special live DJ music score by Raphaël Marionneau.