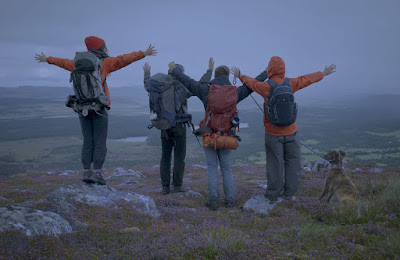 Oscar-winning director Orlando von Einsiedel and his family for for a week long walk to all the places their brother/son Evelyn used to walk in order to finally come to terms with his suicide in a film that you should see with a huge box of tissues acting as your date.

von Einsiedel had barely spoken about his brother much less said his name in all the years since he killed himself. His surviving brother and sister were the same way and the realized that they couldn't let that be. They would have to confront what happened and their feelings together and in a way that celebrated someone they loved. So the three arranged to do the hike together along the way being joined by their parents and Evelyn's friends.

Deeply emotional heart felt celebration of a lost loved one is also haunting and deeply deeply moving look at mental illness, depression and suicide. Everyone tries to figure out what happened and why and most agonizingly could they have prevented it. There are no easy answers. There are some laughs and a lot of tears, both of the good kind and the sad kind.(Bring tissues- you will need them)

You will forgive me for not really saying more but this is not really a film you review but experience. This is a film for anyone who has a family member or friend who has thought of or has killed themselves. It is a film that talks about all of the things that have probably gone through your head about why are they like this and how can/ could we help. This is a film that lets us in on a family's private grieving process that reveals itself to be sadly something that way too many of us go through. You can't critique how a family chooses to mourn since it is their pain not ours.

While not for all audiences, some of you will not want to make this journey, it will richly reward anyone who goes along.

Highly recommended, EVELYN is one of the best films at DOC NYC.