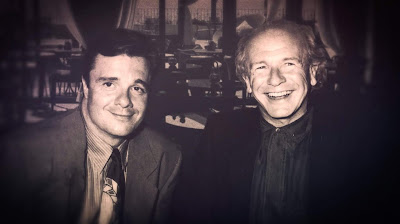 Loving portrait of Terrance McNally told by the man himself and his friends. Covering his entire life  the film shows us how his being openly gay and willing to write about openly gay characters changed not only theater and entertainment but also the world as well.

When I finally could afford to indulge my huge passion for theater I gravitated to the work of McNally because he was writing some of the best stuff I was seeing. (He also wrote one of my favorite films of all time THE RITZ) I read and saw everything by him that I could because I wanted to move people the way that he did. As a result of the deep dive I went into the film knowing a great deal. Wonderfully I came out of the film knowing a great deal more. This film is a great overview of The man and his work told by the people who know the man and acted in his works. It is also a wonderful history of the theater for the last 50 years since McNally has been such a big part of it.

I do have to say that I'm kind of angry with myself for not liking it more. Why I don't think the film is the best of the best is my own problem owing to have my own favorite McNally plays and stories and a desire to see them discussed on the screen. Honestly while only running 90 minutes or so EVERY ACT OF LIFE could easily run twice that because McNally has done so much and touched so many lives. Since you don't have my preconceived notions odds are you are going to absolutely love the film more than me.

EVERY ACT OF LIFE is available digitally Tuesday November 6
Posted by Steve Kopian at November 03, 2018