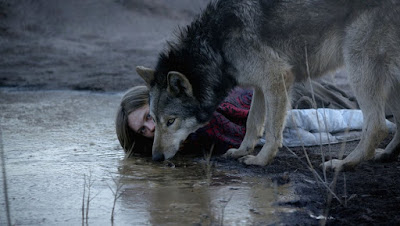 This is a review I started back during the KINO Festival in March and April last year and only recently finished.  At the time I reposted a piece by Joe Bendel. Now at last I'd like to weigh in on my own.

Ania is a lone wolf inhuman form. Staying to herself and not interacting with anyone except when she has to. One night she encounters a wolf in a nearby park and is thrilled. She decides to lure the wolf out again and capture it…taking it back to a small apartment. This changes her and makes her something different than she was.

Head spinning modern Grimm’s fairy tale (well of a sort) is a serious kick in the ass as expectations are upset and the film develops its own unique vibe. I've seen the film a couple of times now and I'm still not sure what the film is or if it's good or if I truly get it. Destined to be talked about and to develop a cult following WILD has a weird visceral effect on the viewer which kind of over rides reason. I would very much like to see the film yet again to get a better handle on it because it kind of knocks the legs out from under me. By the time of final fade out I'm kind of just staring at the screen mumbling about what I had just seen.

While to be honest I don't know if I like the film it is very recommended. WILD is one of the gems of this last years KINO despite not being for all audiences. Those of you who want off beat and thought provoking should put this high on your list. One of my cinematic finds of the year.
Posted by Steve Kopian at November 02, 2018