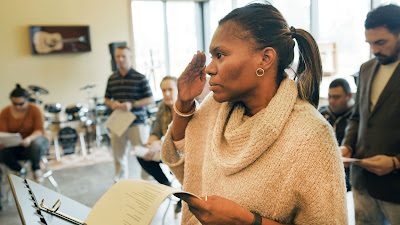 WE ARE NOT DONE YET is much too short. Running a scant 40 minutes it would make a wonderful feature film. I say this at the top because my initial reaction as the end credits rolled was “I want more”.

The title We Are Not Done Yet is the title of a performance piece being put together by a group of vets who have formed a writing group. Spurred on by their mentor they bring together their stories to create a work they will perform. Along the way the great Jeffrey Wright is brought in to help shape the piece into something that could be performed.

A fantastic piece of reportage the film brings us into how some vets are attempting to come to terms with their PTSD and the damage suffered in battle and in the military (some of the women were raped by fellow soldiers). For many this is going to be a revelation since many of the participants really open up on camera revealing the damage done.

And I was left wanting to know more. I would love to have really gotten to know more of the people in the group. I suspect that we don’t know their stories because they wanted some sense of privacy. I would also have liked to see more of the piece…

But that’s a quibble, since what is here is choice and highly recommended.

WE ARE NOT DONE YET premieres Thursday on HBO and plays at DOC NYC where it will have a post screening discussion.For tickets and more info on the special screening go here.
Posted by Steve Kopian at November 05, 2018