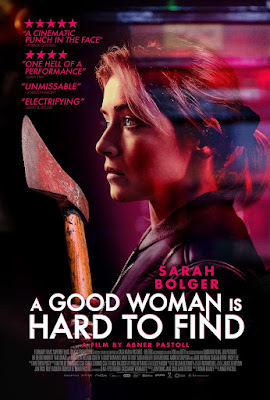 A young other is forced into violence when  the police refuse to investigate her husband's murder and she realizes that the local crime lord maybe behind it.

The violence in this film is realistic and nasty which is why A GOOD WOMAN... played at a number of horror film festivals in the last year. What happens is chilling and in many cases more frightening than in your typical horror film, so consider yourself warned.

This is one of the best crime thrillers of the last few years. A mean and nasty, though sometimes funny, revenge tale that is also a female empowerment story. Sarah Bolger gives an award worthy performance in a role that should warm the cockles of many women's hearts. (Though hopefully it will dissuade them from crossing into homicide)

I will not discuss the plot, I ill only inisist you watch this ASAP. Things are just too twisty for me to risk clueing yo in too early. It is so cleverly told that I'm going to suspect that you won't be aware of where the film is going until it gets there. This is just a great little film that just goes from the first frame so don't even think about going to the bathroom.

This film is a stunner and highly recommended.

A GOOD WOMAN IS HARD TO FIND hits Film Movement's Virtual Cinema Friday May 8th and is highly recommended. Details on seeing it cam be found here.
Posted by Steve Kopian at May 05, 2020