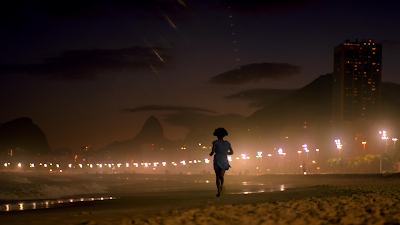 Tati, a teenage girl in Rio, is trying to figure out a way out of her life. Her mother is fine but is an addict. Her neighborhood is under the control of gangs. And her father is getting out of jail. That would be fine except that he's been in as long as she's been alive. His arrival brings change as the  one time gang leader just wants to stay out of the life and run a pizza parlor. However people on all sides want him back in the game or don't care that he says he's out.

This film is based on what happened in the favelas around and during the Olympics when the government tried to clean things up as well as director Paxton Winters seven years of living in Rio. It has a lived in and gritty quality that only someone who was there truly understands. The film also possesses a look, a physical beauty that says that Winters also has a great love of the area and the people he is chronicling.

That the film works as well as it does is due in are part to the cast, particularly new comer Cassia Gil as Tati who wanders through the film as if she owns the place. She clearly does and I would be shocked if she isn't grabbed by some producer somewhere and given a big budget film to star in and come to world wide attention.

This was one of the last features I screened for Tribeca this year and it is easily one of the best. Highly recommended.
Posted by Steve Kopian at May 05, 2020