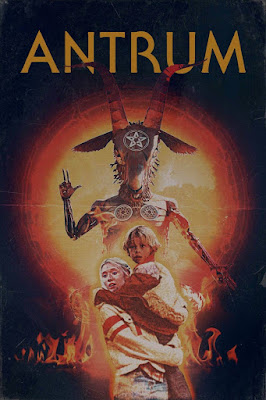 The story in short documentary that begins the film says that when ANTRUM appeared in the early 1980's the theater it screened in burned down. The film then was submitted to various film festivals where the programmers who saw it died. The film essential disappeared everywhere but as a folk tale which said if you watch it you will die.. The film itself is about a sister and brother digging to hell in the place where the devil fell to earth. They are going to redeem their dog.

Moody and creepy this is not a film of jump scares but unending dread. This is a film that feels wrong at the start and then just keeps going in a low tech "we're going do things to get under your skin and make damn sure you're not going to sleep tonight" sort of way.

This is a film that feels like a sister to the classic EQUINOX which was made by students in the late 1960's and ended up getting a big release. It feels two steps removed from a home movie with the result it's freaking creepy.

I suspect that some people will scoff at the film and it's cheapness and lack of jump scares but that would be wrong. This is a film that works because it's different than every other film. You just have to be willing to go with it.

Currently on Amazon Prime in the US it just got a VOD release in Australia and is worth a look
Posted by Steve Kopian at May 03, 2020