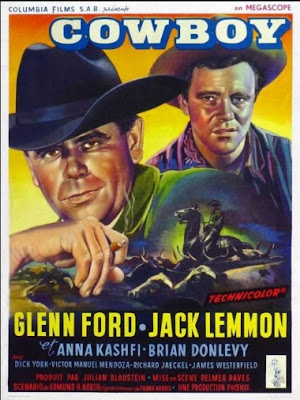 It’s always interesting to see a Western that’s actually about cowboys. Not gunslingers, outlaws, sheriffs, or soldiers. But cowboys, nomadic ranchers herding cattle up and down the prairies. Though “cowboy” is a catch-all term for the characters populating America’s Old West, few actually tell the stories of these thankless herders.

The pinnacle of cowboy movies is probably Howard Hawks’ Red River (1948), and though it doesn’t approach the heights of that classic, Delmer Daves’ Cowboy (1958) stands as a fascinating thematic counterpoint. Both are about greenhorn cowboys struggling under the shadow of domineering leaders, the former an adopted son under his father. But Cowboy isn’t interested in fatherhood, even surrogate ones. Instead, it’s about manly camaraderie. The film follows Frank Harris (Jack Lemmon), a Chicago hotel clerk with aspirations of getting into the cattle business to woo the daughter of a Mexican cattle baron. After a bit of clever finagling, he manages to attach himself to experienced cattle driver Tom Reece (Glenn Ford) and buy a partner stake in his outfit. The only problem is that now Harris has to ride down to Mexico, pick the cattle up, and drive them back to Chicago.

One would expect opposites-attract shenanigans with the meta-textual casting of manly man Ford and neurotic city-slicker Lemmon as rivals, but instead the story clings primarily to Harris and his gradual corruption on the trail. No hollow blue collar evangelizing in this film—the experienced cowboys are shown to be callous and occasionally heartless, best demonstrated in a scene where Reece delivers a caustic he-was-gonna-die-eventually-anyway eulogy over the body of one of his men after he’s killed by a rattlesnake. Harris doesn’t rediscover any lost working class dignity, instead he allows the cowboys’ macho posturing to atrophy his own sense of goodness and decency. The film eventually resolves with Harris and Reece gaining respect for one another and Harris coming back to his senses, but this seems almost purposefully hollow and artificial.

At its heart Cowboy reveals the emptiness of the very masculinity celebrated in Red River. Which isn’t to say the film’s dour. In fact, it’s a surprisingly effective entertainment, particularly the central set-piece where Reece enters a crowded bullring to place a ring on a bull’s horn. How ironic: they hide a condemnation of machismo while making us cheer for it at the same time.
Posted by Steve Kopian at May 03, 2020