Cry Havoc (2019) or what if Charles Bronson fought Jason or Leatherface? 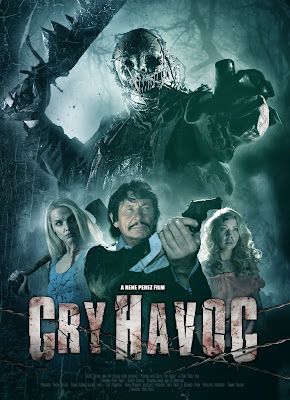 Charles Bronson lookalike Robert Bronzi is back in one crazy ass film.

A rich man wanted by the police for making snuff films is interviewed by a reporter. He is up to no good. At the same time a cop (Bronzi) is looking for a missing woman. He clashes head on with the security team protecting the rich guy and the serial killer.

This is my first run in with Robert Bronzi and he isn't bad. Sure he's not great, but he is adequate which in an unbridled bloodbath like this is enough. All he has to do is fight, shoot and look tough, which is real easy for him.

Mind bending from the first frame CRY HAVOC is completely nuts. Basically Bronzi shoots people and rescues a few women while Havoc, the masked killer who looks like the love child of Jason Vorhees and Leatherface kills people in gruesome ways. This film may lack in many areas but not in the blood and gore department. Other than a way too long talk between the reporter and the rich guy this film pretty much never stops being violent.

Allegedly a sequel to the earlier DEATH KISS, I'm gobsmacked enough by this film to want to go back and see where this insanity started.

Absolutely not a good film in any conventional sense this is a kind of weird film nerd wish fulfillment for anyone ever wondered what might have happened if Bronson fought Jason back in the day. It entertains by its weirdness and  its mere existing. I hate mad slasher films but this film is just so out there I couldn't stop watching.

I'm sorry I can't put words together. I watched most of the film just mumbling WTF over and over again. This is a film the defies description, logic, reason and the definition of good or bad. It is a pile of poo, but at the same time it's golden its complete insanity.

I recommend the film but I completely understand this film may not work for you unless you like the strange, the weird and Mystery Science Theater 3000 material films you can watch with your friends and rip apart.