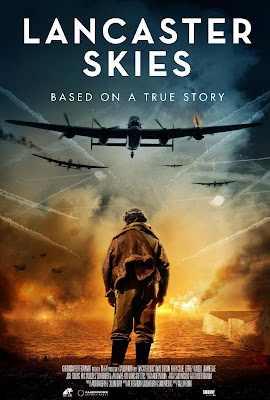 I'm going to mention the budget of this film up front. Budgets shouldn't matter but in an age where CGI is everything, and you get mega-monstrosities like MIDWAY which have tons and tons of no-existent airplanes attacking make believe ships, seeing a small gem like LANCASTER SKIES which clearly is doing the best it can with extremely limited resources instantly makes you want to step away. That is the wrong reaction since this film, which was made for under $100,000 is all about heart which it has in spades.

The film is the story of a bomber crew in the final days of the Second World War. An experienced pilot is moved in to take over a seasoned squadron.

Focused on the men and not the action, the film fills in a gap that most war films leave out, the parts of war that are not rah rah or sheer terror. These are guys doing what the can to end the war and stop the killing at great cost to themselves. While there are some missions this film is mostly in between and we are better for it because it gives us more than a knee jerk kick to the things that transpire. We care and are moved because we spent real time with the men and women.

I really liked this film a great deal, which surprised me. I'm not going to lie, I initially agreed to screen the film because of the Covid nonsense wrecked all of my festival and new release coverage. Desperate for something new to give you I said yes. I am glad I did since LANCASTER SKIES caught me by surprise.  As I said above this is a small gem that deserves to be seen and which is much better than its IMDB rating would lead you to believe.

LANCASTER SKIES hits digital in the US on May 5 and is recommended.
Posted by Steve Kopian at May 01, 2020