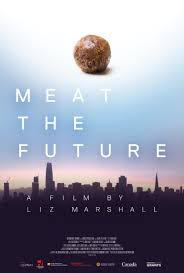 Dr. Uma Valeti, the co-founder and CEO of Memphis Meats and his team are striving to change the way meat if produced. looking to do away with the need for massive farming they have come up with a way of  growing cells from animals so that they only grow the parts we eat, thus ending the need to kill animals and potentially ruin the environment with factory farming.

The idea of growing only the meat we love is an intriguing idea and until I saw this film I hadn't realized that we had advanced to the point where we can start to do it, though not on a large scale. Watching the early part of the film I really began to realize that this maybe the way to go if we are gong to continue to consume meats as part of out diets.

Unfortunately I'm not to sure if this film really needs to be a feature. It's not that the film is bad, but more that there isn't really enough real material to sustain 80 minutes. Once we have the basic facts the rest kind of seems like this is a promo film for Valeti and Memphis Meats.  I really don't need to know all the things we learn about the company. My interest waned as this film began to preach to .the choir (Something the directors GHOSTS IN THE MACHINE also did)

As a result I am mixed on this film. I really like the idea of growing meat cells outside of an animal and the explanation of how that can help the planet. I just don't really need to see the rest, which is going to send some people off to their stock broker to invest.