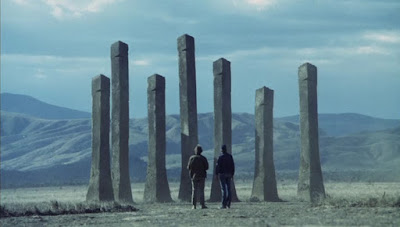 Though Steven Spielberg’s Jaws (1975), a little movie about a big shark, elevated the nature run amok genre to new heights of popularity, the films had already existed for years thanks to a generous seeding of cheesy fifties monster movies and the nascent environmentalist movement. Of all these proto-Jaws films, one of the most, shall we say, unique was Saul Bass’ Phase IV (1974), the story of the battle between two scientists and a colony of hyper-intelligent ants.

By the seventies, Bass had established himself both as one of the best graphic designers and title sequence creators in America. But the ability to make great corporate logos and openings to Hitchcock films don’t necessarily translate to directorial talent, and in Phase IV we see a fledgling filmmaker biting off more than they can chew.

After a strange cosmic event grants a colony of ants in the American Southwest hyper-intelligence, the little bugs declare war on the surrounding humans, forcing all but one family off their land. In their place they build giant stone towers which eventually draw the attention of scientists James Lesko (Michael Murphy) and Ernest Hubbs (Nigel Davenport). Setting up a sealed dome next to the colony, the two find themselves in a battle of wits against the ants who keep creating new ways to infiltrate and sabotage their equipment. (Oh, and there’s a subplot about a local teenager who survives an ant attack and joins the scientists in their lab. But she’s such a non-presence that if she wasn’t central to the bizarre, inexplicable ending she wouldn’t be worth mentioning at all.)

The film feels like the reverse engineering of a Moebius comic strip—there’s an intense hermeticism to the world the movie inhabits, almost as if it takes place on a foreign planet populated by strange monuments to forgotten alien civilizations instead of on earth. The extensive insect sequences filmed by wildlife photographer Ken Middleham further add to the illusion of witnessing the goings-on of a different world as they’re all shot in strange, disquieting close-ups. As opposed to the dry, clunky, and tonally inconsistent human sequences, the bits with the ants demonstrate an almost pre-sound cinematic ability to tell stories solely with images. One almost wishes that this was a twenty minute short told strictly from the ants’ perspective instead of a full-length feature about the humans.
Posted by Steve Kopian at May 06, 2020