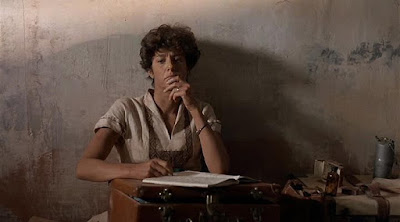 Lest you think things have gone loopy with the numbering of Nate's Quarantine Quapsules,I have not.  Nate didn't start sending me the capsules until he had reached number 5.  In order to keep the set complete I'm posting the first four over the next couple days as bonus pieces.

Reading Paul Bowles’ lyrically desolate novel The Sheltering Sky, the one filmmaker whose name kept coming to mind as the best possible adapter was Michelangelo Antonioni. After all, he’d largely made his reputation with films examining existentially anguished bourgeoisie vanishing—sometimes figuratively, sometimes literally—in strange, foreign environments. But seeing Bernardo Bertolucci’s 1990 adaptation proved me wrong. Watching him unspool the terrible fates of Port and Kit Moresby (John Malkovich, Debra Winger), two wealthy Americans on holiday in Algeria, revealed that the essential ingredient to properly translating Bowles’ story and prose is an innate eroticism, something that while present in the text gets overshadowed by its penetrative explorations of upper-class ennui. I don’t just mean an eroticism of the flesh; the novel demands an eroticism of place as well.

And that Antonioni never had. Though he frequently set his films in the shadows of stirring vistas—craggy Mediterranean islands, candy-colored industrial wastelands, sandy Californian deserts—they seldom vibrated with anything more than conspicuous emptiness. They were silent, sterile stages for his characters and camera to wander within. Only Bertolucci could see an empty desert dune, a rusty dock, or a near-abandoned fort and find the same beauty one would in the curve of a breast or buttock during lovemaking.

And this is a film which, for better or worse, is concerned primarily with beauty. Working with legendary cinematographer and longtime collaborator Vittorio Storaro, Bertolucci constructed one of the most visually gorgeous films of his career. He centers his compositions on empty space, his characters dwarfed by their surroundings as they stumble ant-like through forbidding cities and unknown wildernesses. His close-ups, meanwhile, suggest impotent paralysis, more often than not focusing on characters barricaded in hotel rooms and tents.

One of the only times these two tendencies cross is a brilliant scene serving as the emotional fulcrum of the whole film: Malkovich and Winger try and make love while bicycling in the desert only to be so disturbed by the alienness of the environment and the unexpected realization of their love for each other that they break down crying.

That the film is flawed is inevitable—it clings too closely to Bowles’ plotting while failing to capture the totality of Bowles’ esoteric musings on fate, resulting in a narratively overstretched experience. But it’s both good and proper that Bertolucci took the shot adapting it and not Antonioni.
Posted by Steve Kopian at May 06, 2020