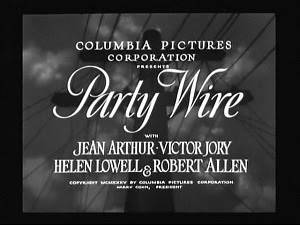 Watching Erle C. Kenton’s Party Wire, I was continually reminded of Fritz Lang’s Fury (1936), one of the most notorious proto-noir. That film followed gas station owner Joe Wilson (Spencer Tracy) who gets wrongly accused of kidnapping a child, convicted in the court of public opinion, and barely survives an attempted lynching. Much like Fury, Kenton’s film examines the life of someone destroyed by small-town gossip. After a group of eavesdroppers misinterpret a frantic late-night message on a party wire—a communal telephone line common in small towns of the era that anyone could listen in on at any time—the townspeople suspect local accountant Marge (Jean Arthur) of getting premaritally pregnant by her old boyfriend. Led by the joyously vindictive Mathilda Sherman (Clara Blandick), the locals ostracize her. She’s fired from her job at the local bank, publicly humiliated in a town contest, and threatened with messages telling her to get out of Dodge.

In both films the wrongly accused victims get their comeuppance: Wilson orchestrates a public trial that convicts members of his lynch mob; Marge gets her fiancé, local diary magnate Matthew Putnam (Victor Jory), to transfer his company’s money out of the local bank and fire all the town’s diary workers. And curiously, both films use montage to liken the small town gossips to animals—Lang with a flock of chickens, Kenton with croaking frogs.

But the stark difference between the two films comes in their approach to their material. Lang’s film is full of bare-teethed anger and nihilism; one wonders how he would’ve ended it if Hollywood hadn’t required a happy ending. Kenton’s film, meanwhile, is a light comedy. Not a dark comedy, mind you; the humor doesn’t arise from the absurdity and injustice of the situation itself as it might in a screwball or a Coen Brothers film. Comedic relief is instead nailed on like so many boards on a piece of drywall. Kenton fills his film with comedic set pieces comprised of local color: a trio of old biddies spying on each other through the party line; a long-winded judge giving a speech. A good ten minutes of the seventy-minute runtime is devoted to Marge’s boozing father Will (Charley Grapewin) and his various schemes to hide moonshine in cough syrup and linseed oil bottles. One wishes Kenton had committed to a more focused, pointed approach like Lang.
Posted by Steve Kopian at May 01, 2020