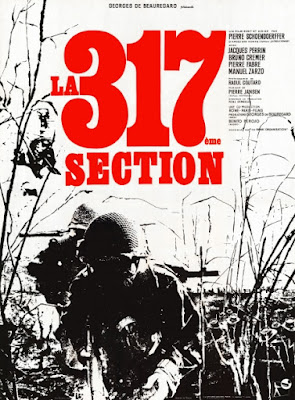 It is rare that you see a film that has a reputation as being “one of the best” of anything, which, when you finally see it is as good as you’ve heard. More times than not that isn’t the case, sure it will be good, maybe even great, but if you say something is the BEST you’re almost looking for a fight.

I had heard that THE 317th PLATOON was either one of the best films on the war in Indochina (aka Vietnam) if not the best. It is a film Oliver Stone raved about and which was held in a scared  reverence by the few people I know who've seen it. However despite the reputation it was nigh impossible to see in English. I’ve been trying to run down a watchable copy with good subtitles for years and have been thwarted at every turn. I could see bits or really bad versions but not the whole thing. And then I received an email saying that Rialto had picked up the Studio Canal restoration and asking if I wanted to go to a press screening.

So on a sunny July day, in a small theater at the Metrograph in New York City with several other hardy souls I finally saw THE 317th PLATOON.

The verdict? It is as good as its reputation - It is one of the best war films you’ll ever see.

The film is the story of the titled platoon in the waning days of France’s involvement in Indochina. As the battles that would result in the end of French control in Southeast Asia are occurring, the men of the 317th platoon are told to abandon their post (in Laos) and travel to Dien Bien Phu where in theory they will be safe. Heading out they rapidly run into problems when what they think is a small group of the enemy proves to be larger when engaged. As they continue to try to make their way to safety their numbers dwindle and their safe haven looks to be on the verge of falling.

Don’t go into the film looking for epic battles and fire fights. While there is some, this film is more a look at men in battle. How do the men react as the shit hits the fan and hope seems to be fading? We find out and more. This isn’t Hollywood, this is war as it was fought-writer director Pierre Schoendoerffer was not only in country during the time the events shown would have taken place but he was captured at the fall of Dien Bien Phu and spent several months as a prisoner.

Looking like news reports of the war the film feels like we are in the jungles of Indochina. Actually since the film was shot in Cambodia we really are in the places where this might have happened. And while other films have been shot in South East Asia I don’t think any other film feels like this one. It’s not just because of the location but because what we are shown is not being filtered through nostalgia or memory but is instead being revealed through straight reporting on a war that was still happening a couple hundred miles away. Watching this film you can’t help but wonder what would have happened if something like APOCALYPSE NOW had been shot, as had been intended, in country during the war.

I love that the film does away with the notion of good and bad. There is no black and white. It is simply two sides at war. While we side with the fleeing French, it’s only because we get to know them. We travel with them so they are not like the shadowy warriors they are fighting. And if you think about it the Viet Minh are not shown to be bad since the discussion about leaving the wounded never based on fear of what would happened to the wounded, rather simply the notion of no one gets left behind.

The mood is carefully modulated. There are no real peaks and valleys of emotion, just endless oppressive resignation and dread. The men know they are in shit and they just go with it. This is war, while there are bumps as things get hot, the fear never leaves. There is never a release because even when the fighting is done you can’t be certain that you are still safe. You never know if in a quiet moment if there will be an attack. And even in a quiet night, where the men can sleep, death visits. We feel the tension of uncertainty and then we feel the soul killing nothingness of knowing it’s just going to be varying levels of bad.

I’ve never felt that way in a war film before. I’ve never felt, okay. People die and things happened, and then we go on to the next bad thing. The audience, like the men on screen, go into a collective shock.

This film is among the best war films ever made and probably in the top three films on the war on Indochina, if not the top film. I can’t recommend it enough. It is a film that needs to be seen and discussed.

While could say more about the film, I’m going to leave it there. Not because I don’t have more to say, but more that everyone who is reading this needs to go see the film to get a taste of the film’s truths. You need to discover the film for yourself and not listen to me prattle on about it. See it and ponder it and then discuss it with anyone else you run across.