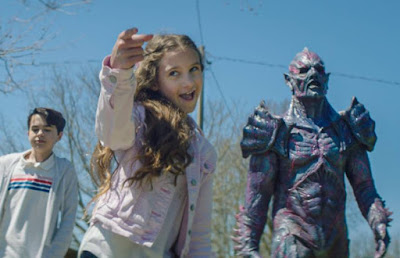 A young girl and her brother end up with a gem that will control a homicidal intergalactic killer and decide to use him for their own ends.

Okay why isn't anyone talking about this film?

I mean this is a glorious throwback/send up of a 1980's kids film twisted and turned into a blood soaked comedy for adults. Its a film that gets every god damn thing exactly right with the result that you will laugh yourself silly as you talk back endlessly to the screen.

In other words F-YOU COVID because this is a film you need to sit and watch with a theater full of  friends who love total film insanity.

Wasting absolutely no time the film  starts with the gem being dug up and a few minutes later gallons of blood and severed limbs are flying everywhere. This film just moves like the wind  with almost every minute containing a joke or some over the top ridiculous bit of violence. It just doesn't stop and as such it is a great amount of fun.

This is a film, that for it's target audience, is going to be pure cinematic joy.