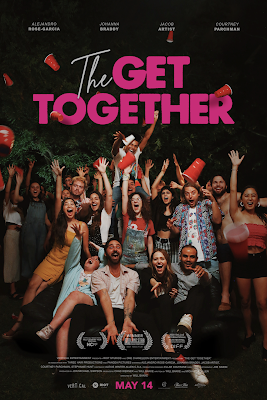 This is an innocuous comedy that will give you some laughs before disappearing from your mind.

Everything converges around a bunch of twenty somethings at a party trying to figure out the world. One girl can't imagine why her best friend doesn't want to live with her any more, a young man finds complications on the night he wants to propose to his girlfriend, and a musician is rudderless since his girlfriend left him.

Playing like a teen comedy of yore but with characters who have the ability to drive and containing a slightly more serious side to the romance THE GET TOGETHER amuses. Its not a remotely heavy film and you pretty much know that in the end everything is going to be alright.

While I like the film I never fully connected to it. The problem is simply that the characters are really light weight. I don't know whether to blame it on the characters being little more than sitcom creations (you can pretty much guess the arcs seconds after meeting a character)) or the fact that that there are too many characters and too much going on in this 74 minute film. Actually the film runs about 66 minutes minus end credits which makes me think that this should actually be some kind of pilot for a TV series.

Worth a look for those so inclined.