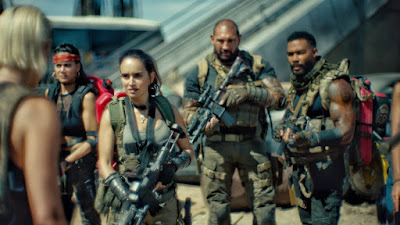 Hands down my least favorite Zack Snyder is way too cartoony and intentionally over the top- not to mention being too f-ing long. I really disliked this film and I hate on much of MAN OF STEEL.

The plot has a bunch of mercenaries dropping into a walled off Las Vegas in order to steal millions of dollars from the vault of one of the casinos. The catch is that the city is infested with millions of zombies.

Sketched out with only the lightest of pencils ARMY OF THE DEAD exists just to be gross and violent. The film's sole reason to exist is to have good guys fight a losing battle against the dead so that we can watch body parts and blood fly in every direction.

The story is told with a real sense of urgency that is matched only by its complete lack of logic and reason. While the set pieces are outstanding and the effects well done there really wasn't a logical reason for anything that happened and I found myself constantly talking to the screen wanting to know why they were ding one thing as opposed to another. But we aren't suppose to ask question, we are simply supposed to ride along.

I got bored early and I stayed that way. There is no reason this film needs to clock in at almost two and a half hours other than the fact that Snyder needed someone to tell him no.

Thank god I saw this on Netflix and not in the movies.

I suggest you take a pass but I'm guessing all the horror fans will just wade in regardless,