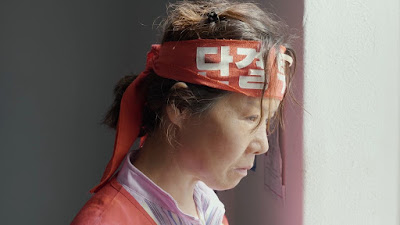 O-bok, a woman in her 60's is sexually assaulted by a co-worker. As she tries to come to terms with happened, she finds her friends want to cover it up and her family doesn't want to deal with what happened.

Disturbing look at sexual violence and the way many people, especially those in South Korea refuse to deal with it and its ripples. This is a tough and heartbreaking film. Its a film that will make you feel uncomfortable. Its also another dark portrait of Korean society that will make you wonder what sort of a place the country is.

That the film is as effective as it is due in large part to Jeong Ae-hwa as O-bok. Its a gutsy and very real performance where you feel everything she is going through. I can't imagine how didn't take the role home with her. Its one that Oscar should consider rewarding. Trust me her performance is as good as film acting gets and it will crush you.

If you want a tough social drama or t simply see one of the best performances of the year then GULL is for you.