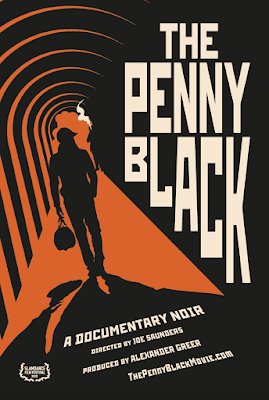 With THE PENNY BLACK getting a release starting Friday, here is my Slamdance review from last year
THE PENNY BLACK is a film that has bothered me since I saw it a few days ago. It bothered me so much that I sat on reviewing it until I could really sort out what I think of the film.

The film is the story of Will Smith who got to know a Russian man named Roman when they would both go outside to smoke. One day Roman tells Will he is going away for a couple of weeks. Would it be okay if he left something valuable with him until he came back. Will says sure and ends up with a collection of stamps, potentially worth millions in his possession. Not long after that Will tells director Joe Saunders about it and he begins filming. Then Roman disappears, Will gets spooked and isn’t sure what to do and he begins to try and run down Roman.. It a quest that last several years and goes in unexpected ways.

For the most of its running time THE PENNY BLACK is compelling norish tale with potential links to the Russian mafia, an Arizona murder and robbery and other twists. There are all these intriguing threads of speculation of what might be happening that keep us watching straight on to the end. There are so many dangerous possibilities that we have to see what happens. There is even a mid-tale twist where we begin to wonder about Will because of what happens and his past (his father was conman). We are invested from almost the outset, and we stay invested until almost the end credits…

…and that is the problem, there is a point very close to the end when the grip of the film is released when we realize that how it’s going to end is not going to live up to all the speculation in previous 90 minutes. It’s so bad that when it ended I said “really?” very loudly out loud. Obviously if that’s the way it went, that is the way it has to go and I can’t argue that...

…but at the same time without a big definite payoff the whole thing seems like a long con. While I had moments where I wondered if some of the turns were manufactured, when the ending arrived I was left to ponder if any of the film was true. Some of it probably is or maybe all of it. I wasn’t sure and in the wrong sort of way I didn’t care. Don’t get me wrong it is a hell of a ride- but there is no real pay off it just kind of ends, with the implications about the missing stamps feeling awfully contrived.

I honestly don’t know what to say- it’s a hell of ride that made me feel like I was following PT Barnum’s signs to see the Egress.
ADDENDUM:
A couple of months ago I got an email from Joe Saunders concerning my reaction to the film. I rewatched the film at his request and we discussed the film over the course of several emails.
The first thing I noticed was the fact that not having expectations about the end I liked it so much more. The film does work better than I thought. You really do want to see the film.
The second thing we discussed was Saunders refusal to become part of the film. Despite the fact that this is a story being told to him he tried to remain outside the film. He never really tells us wat he thinks of it all. I completely understand why, but at the same time he is there and I wanted to see what he thought. It was of course a personal choice. (I'm curious what you all will think of it)
Now that the film is out it is your turn to wade in and see a film that really is a hell of a ride.
Posted by Steve Kopian at May 17, 2021