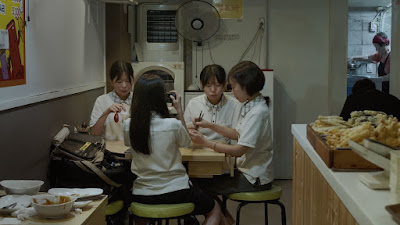 Four girls in a high school photography club take the subway to the end of the line and then go exploring.

A wonderful drama about four friends exploring the world just as they are about to cross into adulthood. For me this is a sweet little film about friends being friends as they explore the world. I love that there aren't huge revelations but lots of small moments. This is a film that is alive in the details.

I have to point out the great cast. The reason the film works is because the film has been perfectly cast. The four young ladies who are on screen pretty much from start to finish, are amazing. They inhabit their roles to the point that I can't imagine them walking off the set and not being those characters. I really wish that Oscar would have an ensemble award because they would be in the running.

If you want to see a small gem of a film SHORT VACATION is recommended.