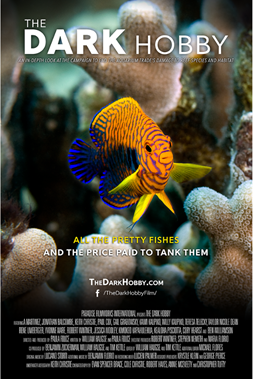 Dark Hobby is a look at the aquarium industry. More specifically it’s a look at the salt water aquarium industry which is stripping the reefs of Hawaii of the colorful fish. The trouble is that for 50 bucks and no training you can get a permit to collect fish. The trouble is that so many people are doing it the fish are disappearing and going extinct.  Worse the removal of such vast quantities of fish is destroying the echo system.

As someone who has had aquariums for much of his life, this is a shocking story.  I never realized that most fish last less than a year in their tanks and have to be replaced. (I say this because the fish that we had tended to last for years.) As pretty as the fish are I no longer see the reason to have something that is going to die so quickly.

While very much a one sided film, there really isn’t any talk about why putting the fish in a tank is a good thing, the film still makes its point if only in that it reveals how out of control the harvesting of fish is.  And it also reveals how dangerous can be  as the collectors violently try to stop the anti aquarium activists via means that are deadly.

If you care about the environment  this film is worth a look.