This year's collection of Greasy Shorts at Cabane à Sang proves with out a doubt that Frank Appache and the other programmers at the festival are the greatest at putting together collections of short films. Between this year and last year they programmed over nine hours of genre shorts and pretty much hit it out of the box. They simply don't program bad films, or if they do it's so small percentage as to not count.
That may sound like hyperbole but it is not. I see hundreds of shorts in dozens of collections every year and every other festival programs a turkey or two. Appache and his crew don't. Yes they may program something that doesn't click with you, but you you always know exactly precisely why it was programmed. If you want to know why I consider Cabane à Sang one of the top two or three festivals I have ever run across, the programming is it.

This year the collection is full of gore and disturbing images and stories and I hope to see it again.

IN order to make sure you know the names of the truly wonderfully f-ed up collection of shorts they screened I'm going to give you some quick thoughts on each film in the collection.

I recommend them all- and I highly suggest that you get to the fest next year and to make an effort to see anything the festival puts together.

EVIL MASSACRE
Another film trailer about a woman stalked at a cabin in the woods and the gory revenge she takes. Wicked fun

FUCKING GHOSTS
A trailer for a horror film about a couple haunted by ghosts stealing their sheets and having sex.  Its very funny

EL TRONCO TALADO
A man with an ax cuts off a man’s fingers. He then cuts off the first man’s head. The head then goes off… and it weird and funny.

BITE
A man working on a project in his office is harassed by his wife and an annoying coworker. This is a disturbing  little film that makes up really feel the put upon guy.

DEVIL’S ASSHOLE
A woman making chili for the LGBT Halloween Chile Cookoff is tricked into using The Devil’s Asshole Chili Powder. This results in a demon coming to life and battling the woman in a war of words.  Tasteless and the right sort of funny.

FILTERED
Creepy film about a phone call between a woman and her boyfriend. When they use filters she suddenly realizes that someone or something unseen in in the room with her. Its very creepy

CRITICAL HIT
A woman dressed as Pickachu is kidnapped and forced into a fight club. It’s a darkly twisted send up of Pokemon and Fight Club

BUNGEE INC
A man sets up a bungee jumping stand on a high bridge… and to say more would be telling. A wicked short film.

STUCK
A creepy guy finds his way into a girls gymnastics training facility hoping to get his rocks off, instead he finds himself stuck in the wrong place. Good revenge film might be a little too long, but it's nasty fun.

RECHARGING FEMALE POWER
A woman recharges her self. Short and sweet.

LAST CHRISTMAS OF THE UNIVERSE
Gore soaked tale of Santa trying to deliver a gift to the last "good" person in a post apoclyptic world filled with bad "children". This is destined to become a Christmas classic- no really-it is. I can't stop recommending it.

SKATEBLOOD
A skateboard runs into a gang who wants to teach him the rules. Bad mistake. Wickedly funny bloody action film produces big smiles as it twists in unexpected ways.

ATTACK OF THE CLOWNS 2
Impossible to describe film involving dreams, clowns, ghosts and TVs. Its going to disturb you

WHO'S THAT AT THE BACK OF THE BUS
While sitting alone on the top of a double decker bus, a woman sees a strange person in the reflection in the windshield. This is creepy, disturbing and uncomfortably funny for reasons I can't explain lest I ruin it. Its f-ed up

RETURN OF THE SHITTERS
Very wrong film about a man whose turds come to life. I can't say more because this is the sort of very wrong film you just have to see and experience for yourself

HEAT
Excellent film about a customer in an ice cream shop on a hot day. I've seen this before and its such a wonderful film I'm not surprised its showing up at places like Cabane a Sang

THE FEAST
A man eats a claymation figure. Disturbing. It shouldn't be, but it is.

TOMORROW I WILL BE DIRT
Fucked up hellish animated nightmare that is a sequel to Jörg Buttgereit's SCHRAMM about a serial killer. This is from a sick pit of hell. That's a rave and the film is a masterpiece.

L'INCROYABLE PAUL
A superhero recuses a young woman from a gang...and I can't say more because there is a flip in the film that you need to see.

JIMI
The story of a wanna be musician who worships Jimi Hendrix...and this is just wrong....not sure its good but I can't unsee it.

HOSPITAL DUMPSTER DIVERS
Gross out film about a creature brought to life in a waste disposal plant handling hospital waste. Disturbing in a way that only practical effects  can achieve, this little nightmare gets under your skin and makes you want  to take a shower. Probably a few minutes too long the film twists the knife and makes us feel incredibly uneasy as the little beast and various liquid splash across the screen. 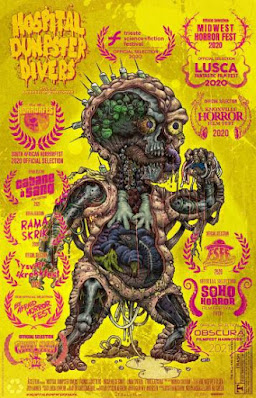