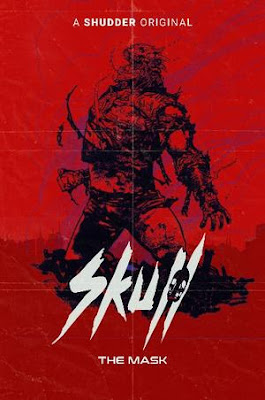 An ancient ceremonial mask that  makes the wearer a vessel for a god of vengeance is found and purchased by a collector. Her girlfriend performs a ritual with it and awakens the god with tragic results. With the mask out in the world the bodies begin piling up. Its up to a police woman to try and stop the killing.

While far from perfect one can't help but like SKULL's go for it attitude. Despite being low budget the film simply is much too earnest for anyone who likes blood soaked films not to like it. I love that the film makes no excuses and just goes, asking us to just go along on it's journey. I was so charmed by it's love of what it was doing  I didn't care there were occasional bumps along the way.

I will be perfectly up front  and say that one of the reasons I like this film is the rough around the edges quality to it. I am so tired of even the no budget films trying to hide their flaws and look perfect. Perfection in horror isn't a good thing because it's often so slick there is nothing to catch you intestines on. SKULL has moments that get you in the gut because its not perfect.

One of the big plusses for me was the film's insistence on using practical effects. Say what you will about the unevenness of some it, the fact that the filmmakers took the time to make limbs, tentacles and gallons of blood that the actors could actually interact with warmed the cockles of my heart. I know CGI is king and it can look real but much too often, especially in lower budget films the effects are wrecked when the effects people  can't even have the actor's eyes line up with their effects.

SKULL is the best sort of horror film, one you want to watch with friends with popcorn and a drink of choice. Its a film you want to hunker down with and talk to about its flaws and joys. Its also a film where when you get to the end you might, just might, be wondering if the sequel will be as much fun,

SKULL THE MASK hits Shudder on the 27th and is worth a look.