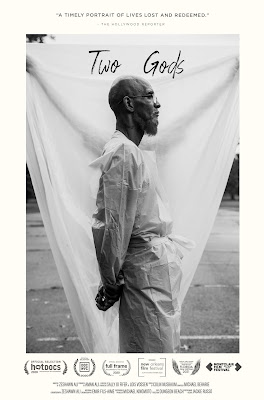 Hanif is a Black Muslim casket maker living in Newark New Jersey. He has a troubled past which he seems to have overcome. Hoping to make things better he takes to young men under his wing. Furquan, is a 12-year-old without a father figure whom he tries to teach the right things to do. Naz, is 17 years old and is flirting with falling off the straight and narrow. Hanif struggles with life and the uncertainty that he is doing right by the two men he is mentoring

The power of Two Gods is how the film drops us into the lives of the people on screen. The film begins  and it just goes. While the film  gives us a note as to who some of the people are on screen  and notes to events that happen off screen (Naz being arrested for being in a stolen  car.) Mostly the film just lets events play out and assumes we are going to catch up.  It’s a gamble  that resulted in me taking a little while to click with this film, but somewhere along the way I found myself deeply connected and caring for everyone on screen. Say what you will but the construction of the film slowly pulled me into it by walking us through Hanif's life. Its brilliant move that forces us to lean in a little bit bringing us closer to everyone on screen.

I really like this film a great deal. Never mind that it opens my eyes to a life I know nothing about, I love that the film doesn’t sugar coat anything. This is a very bittersweet film. While there is hope, there is also pain and the world at the end isn’t skittles and beer. More often than not with similar films the director would be tempted to refashion everything into some sort of wholly feel good story. That’s not the case here. This is life and the characters are making a go of it which is enough.

Two Gods will move you. It will pull you into the film and make you feel something. In an age where most films flicker before our eyes and then fade away forgotten, Hanif remains, a stoic symbol of life going on despite the odds and we are better for it.