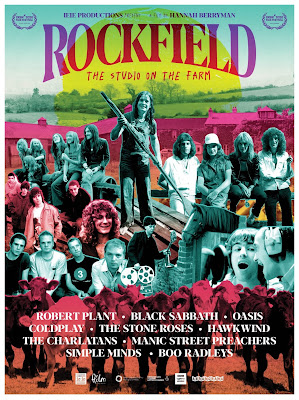 This is the story of two brothers who wanted to make music,  and in the rush to get better built a studio on their farm where musicians such as Robert Plant, Black Sabbath, Queen, Oasis and others went to make music history.

Watching the opening minutes of ROCKFIELD I thought this was going to be an over long DVD extra. It was good but nothing special. Then studio funders Kingsley and Charles Ward tell the story of trying to go to EMI to play them their music and ending up talking to George Martin, that things began to get interesting. I mean they got really interesting as their stories (including one of wandering into the recording of Bohemian Rhapsody) collide with the stories of the musicians (Ozzy talks about going to the farm for the first time) and magic happens. This transforms into the tale of how one family shaped music history.

I'm going to be honest and say I was not planning on seeing ROCKFIELD but a slot in my schedule opened up and I said yes. I am s glad I did because one it gets going this film is so much fun. The truth of the matter is I had so much fun that the only thing I can say is wrong with the film is that they didn't get more people t tell their stories. I mean the stories of hat happened would probably fill a shelf of books.

What a fun film.

ROCKFIELD hits Watch Now @ Home Friday and is on the Coda Collection on the 29th.