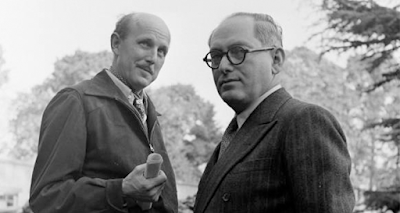 This short film is a masterpiece. Short sweet and to the point this almost half an hour look at the work of Powell and Pressburger is one of the best films on film I’ve ever seen.

The film is basically Thelma Schoonmaker talking about the work of her husband Michael Powell and his creative partner Emeric Pressburger. Over her words we see clips and photos and over the course of the films brief running time we come to understand the men, their films and their influence on modern cinema. Its direct and to the point and as good as documentary filmmaking gets.

Yes you could quibble that it doesn’t cover everything or that it isn’t detailed, but it wasn’t designed to do that. The film is simply and appreciation and primer by someone who knows the subject intimately. It does what it does and gets off. More to the point it provides an almost constant series of  “ah ha” moments. You may think you know the pair but I’m guessing you don’t know everything. What I love is how Schoonmaker- links things up or highlights something in a passing phrase that makes you suddenly see something you’ve never noticed before.

Playing with I KNOW WHERE I AM GOING, it is highly recommended for anyone who loves film.