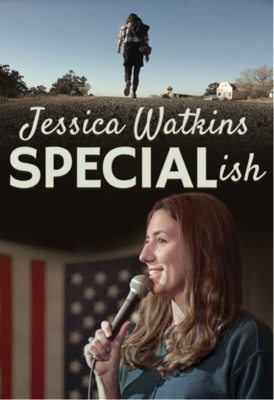 SPECIALish is an hour and a half documentary about stand up comedian, Jessica Watskins who walked across America over the course of 8 months. While walking, she makes stops along the way to do stand up, hoping to end with a big comedy show.
Jessica Watkins was struggling in New York City, waiting tables and wanted to do something big with her life, and so she set out to walk across America.  She left her partner and dog behind, and set off on her own with just a stroller full of gear. She mostly camps, but does occasionally stay at strangers homes.
The film follows her challenges(such as winding up with a knee injury pretty early on), people she meets, clips of her stand up in various places and her thoughts throughout.
As this is something I can never imagine myself doing, it was quite impressive! She also did all the filming herself and didn't have a camera crew, which makes you respect her even more.
This documentary had humor, but also shared the dark moments, which I think is equally important. It also made me aware of Jessica Watkins, who I had previously never heard of.  Since I live in NYC and am a fan of stand up, I'll keep my eye out and try to catch her perform one day!
The film will be available on-demand and on all digital platforms on May 11, 2021.
TW: this film does discuss rape/sexual assault.
Posted by Steve Kopian at May 11, 2021