Shepherd The Story Of A Jewish Dog (2021) opens Friday 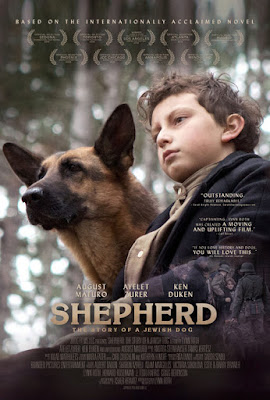 As the Nazis rise in Germany a Jewish family's pet dog gives birth to a litter of puppies. They give all of them away except one. The puppy and the young son bond. When the Nuremberg Laws prevent Jews from having pets the dog is taken away and ends up in with the military. Will the boy and his pet meet again?

This bittersweet film is a nice little historical drama. It's a film that quietly pulls us in, making us think that this is a going to be so dark a film, it almost feels like a family film, before slowly turning darker by degrees. By the time we realize where this is going, we are hooked and can't escape. We care too much not to see how this is going to come out.

I really liked this film. Honestly as the film shifted to the second half I was surprised at how much I was really enjoying the film. I liked that while we might guess where this may end up, we never really don't know quite how this is going to go. It doesn't hit all the expected notes which keeps everything fresh and compelling.

This is a solid little film. Its an unexpected gem that is worth your time and money.