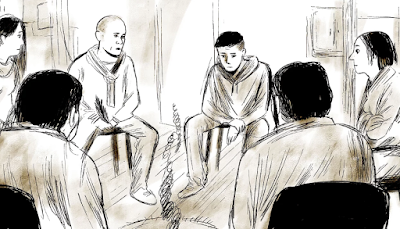 This is a very good look at the course of Andy and his family as he moves through the Seattle court system via an indigenous based alternative program set up to help him get back on track. The program involves lots of talk as well as family and community based support that is geared toward making Andy find his own way back.
Very good and very heavy look at a possible alternative to just locking people up A ONCE AND FUTURE... gives us a lot to take in. Not only are we exposed to the system but we are also given a lot of information concerning everyone involved in the program. Since this is a kind of talking cure, everyone who participates so we get to know the Andy's family as well as the people running the program. Its a stunner and it gives us the heart and soul of a good number of people.
I have seen this film a couple of times now and I have been fighting with writing this review for the better part of two weeks trying to come up wit some grand to say. Unfortunately this film is such that it requires that you take the time and see the film before we can discuss it. It is, as I have seen on each of the times I have seen it, a journey. It is a journey not just for Andy and the people on the screen but for us in the audience. We have to travel along to and make up our own minds and react to what we are seeing. How we feel at the start is not how we will feel at the end. As such giving you my thoughts about the journey from the end will alter how you see it at the start. To that end I  am not going to say much more other than see this film.
A ONCE AND FUTRE PEACE is playing the Human Rights Watch Film Festival and is recommended
Posted by Steve Kopian at May 22, 2021