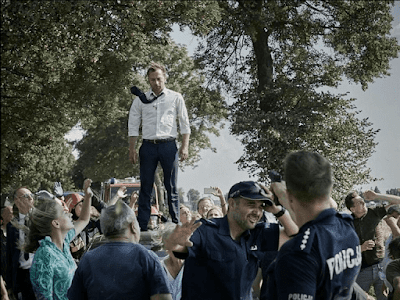 I decided to see SUPERNOVA because Liz Whittemore had a strong reaction to it. She had been rocked by the film and when I got a chance I decided to take a look and see what all the shouting was about.

The plot of the film has a young woman fleeing her drunken lout of a husband. She has taken her kids and run off down the road.  He staggers after her but she still heads off. Anguished he staggers about for a few minutes before a car stops to ask directions. He tries to get in so he can chase down the woman he loves, however the man speeds off.  As the man collapses we hear the sound of a tragedy as the car runs over the woman and children. What follows is a portrait of how one tragedy affects a community.

A gut wrenching 80 minutes, SUPERNOVA will have you staring at the screen with its portrait of real life. Authorities try to save lives, people gawk, others get angry and the driver attempts to get out of trouble.  We aren’t watching characters but people we know. If you’ve ever seen a car accident this is very similar to how things play out.

In its way it is less a film than a portrait of society. Yes there is story but what is of interest, at least to me is the interaction of  all of the people. How do they react when this tragedy touches them, some people have no connection except being inconvenienced, some are related to the victims, others are pressed into service by a government official trying to save his ass. It’s a cross section of society in a small point of pressure.

SUPERNOVA is a small gem and is recommended