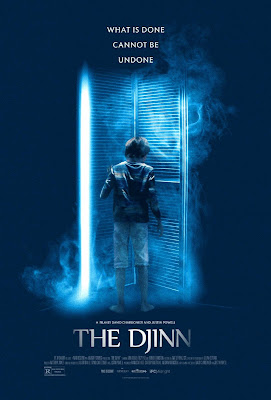 In 1989 Dylan, a mute boy, moves into a new apartment with his dad. While dad is  away he finds an old dusty book of spells wrapped in a cloth. Opening it up he finds that there is a simple spell to get the thing you most desire. Of  course he gives it a go and of course it goes horribly wrong.

For me the film never clicked. It worked so hard to set a mood and to hit you over the head that this is Pinocchio that the film never really came together for me. I could tell how this was going to go pretty much from the start, and while that isn't a bad in and of itself, it drained some life from the film because there were almost no surprises.

The real problem for me is the sparseness of the film both narratively and visually. This is a film with a tiny cast and it really hurts the film at times. The fact that we don't really see Dylan interact with anyone, he looks longingly out the window at some kids at one point, means we really don't get any sense of his life. There is no sense of him or the world outside. He is simply alone in an empty apartment.

The apartment is another big problem, it's too empty. Actually all of the locations, even in the flashbacks are strangely devoid of stuff. There is simply too little of anything anywhere in any scene. Even when they are moving in and sticking the shelves, there is almost nothing in the closets. The apartment feels like it was a location the filmmakers could use for a few days to shoot the film but they never brought in anything to fill it. It might of worked but there simply isn't enough in the rooms to give a sense that anyone is really occupying them. If there was just something in a single shot that made me not feel like this was a real place and not a rented empty apartment I would have liked it more.

From the emptiness to the deliberate construction as a horror  fairy tale DJINN never worked for me. While not bad, it never made me feel it was anything other than okay or a nice try.