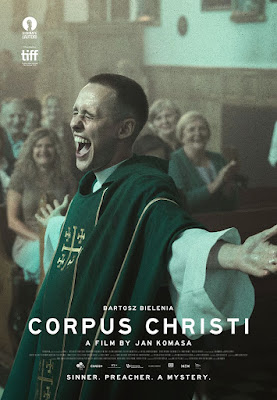 Polish entry for the Oscars CORPUS CHRISTI packs a punch. The film is the story of a young man who has a spiritual  awakening while in prison and travels across the country when getting out. A lie suddenly has a small town believing that he is a newly ordained priest sent to their parish. As his heartfelt sermons attract more followers and begin to heal the town, his charade is in danger of being discovered.

Moving and heartfelt CORPUS CHRISTI is a stunner. A beautiful meditation on belief as well on life and how to live it the film sucks us in and drags us along. Full of wonderful characters director Jan Komasa and writer Mateusz Pacewicz give us people we can relate to as they spin out their tale. This is vital since in pondering the various themes running though the story, especially the notion of who gets to speak for god, we must  relate to the characters on the screen for it to have weight. The characters must be here on earth, sitting in in the seats around us and not on just be cardboard figures on the screen. Komasa and Pacewicz give us that in spades and we are so much better for it.

I will not speculate on the film's chance for Oscar gold other than to say if there is justice it will be in the mix. However, I will add that if Bartosz Bielenia is not in the running for a Best Actor statue then something is seriously wrong. Bielenia gives us his all and the result is a film of extreme intensity and life.  We not only see what he is going through but feel it because he forcibly grabs us by the throat and pulls us along making us feel every thing that he does so in the end we are just as bloody as he is. It is not just one of the great performances of 2019 but probably of the last decade as well.

CORPUS CHRISTI is a great film and a must see. I don't know what else to say beyond that.
Posted by Steve Kopian at May 25, 2021