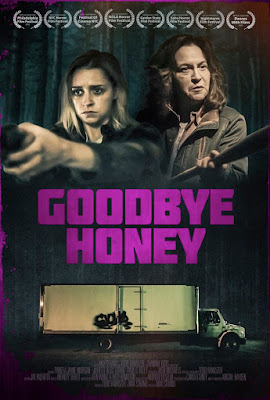 Young woman escapes from her abductor and flees into the night. She comes upon  and exhausted truck driver and insists she let her hide out  in the back of her truck.  However circumstance soon has the pair struggling to stay alive.

Good little thriller moves along so nicely that you can't help but go along for the ride. What I like about this film is that the film uses it's limited location to really crank up the tension. Who would have thought a film set outside could be as claustrophobic as this film is. Okay yes the much of the film is in the back of the truck, however at the same time no one is locked in it.

While I normally hate these sort of films, I was hooked. I wanted to see who lived, who died and how it all came out.

One HUGE word of warning, as good as the film is it requires two contrived plot pints to make it work. The first is a dropped set of keys and the other is a broken phone. Where I could have had no trouble with one, two was a bit much. While it wasn't fatal, it did make an excellent thriller just a good one. Hell I would have bought the phone being locked in the truck without question, but the broken thing was just too much.

Quibble aside GOODBYE HONEY is an entertaining popcorn thriller and worth a look.