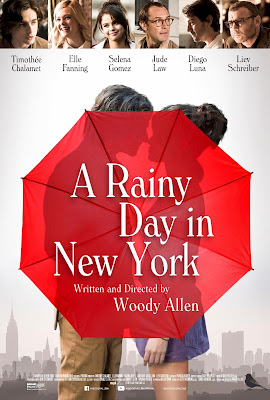 This alleged romantic comedy about some rich twenty somethings who go to New York was controversial because the cast (Timothée Chalamet, Jude Law, Elle Fanning and others) worked with Woody Allen because of all his misdeeds. Many in the cast later disavowed it, while the release was "canceled" only to have the film eventually repicked up and dumped on Amazon Prime.

As dull and unconnected to reality as Woody Allen's films have become over the last few years, A RAINY DAY IN NEW YORK is the complete and total slide into awfulness. While Woody has made at least one more film, in my eyes it is effectively the end of his creative life.

Badly overacted by a cast who seems not to have been directed and using a script that has no connection to reality this is a film that boggles the mind in its awfulness. Jokes fall flat. Situations never ring true. Watching it you are left to wonder how did Woody come up with this? I'm guessing that the fact that he has been forced to stay more and more in an ivory tower surrounded by a small group of friends has made him more and more unconnected to reality.

A huge part of the problem is that Woody falls back on his pre-Annie Hall comedy which not only has dated 50 years on but only worked in the context of his contrived situations such as future America or tsarist Russia. The jokes all fall flat. Of course it doesn't help that pretty much everyone in the cast gives their worst performances of their careers. The performances aren't phoned in but play more like they were dead (Liv Schreiber is truly WTF) or in the case of Elle Fanning its as if a weird pixie has entered her body after it was goosed by a million volts of electricity. I won't get it Chalamet or Gomez who have no chemistry and give performances that will give their detractors ammunition for decades to come.

This is just a bad film.

WONDER WHEEL, Woody's previous film had moments and kind of almost worked in an awkward way, however RAINY DAY never works. It's like watching an alien make a movie about something he has no knowledge of.

Email ThisBlogThis!Share to TwitterShare to FacebookShare to Pinterest
Labels: comedy, not worth the effort