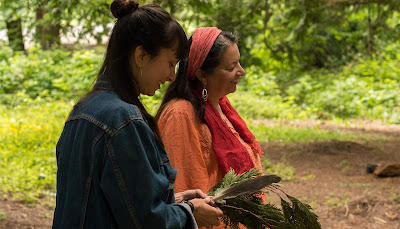 Kendra Mylnechuk Potter was adopted. Her birth parents were Native American, her adopted parents were white. She was taken from her parents as part of a government plan to "wipe out the Indian and save the man." We then watch as Potter attempts to reconnect with her birth mother and her birth culture.
This is not only an excellent look at not only one woman's story but also a great starting place to see how the US government kept trying to wipe out the Native Americans. On some level I think many people think that the nonsense stopped at certain point, but as can be seen here and the continued efforts to seize or usurp Native lands it's clear the government wants the non-Europeans gone.
While the history of the treatment of  the tribes will make you angry, there is a happiness in the film. We watch as Potter and her family reconnect with their heritage. Its clear tat despite the governmnt wanting it all to go away it isn't, at least not with out a fight.
Recommended.
Posted by Steve Kopian at May 19, 2021