Because of Covid and a prior commitment to go to another festival I could not get to Montreal to attend this years Cabane à Sang. I’m really bummed out about it because this years films really needed to be seen in a theater with other totally insane people. Thankfully Frank Appache arranged for me to have access to the festival for which I am eternally grateful.

I will be posting a piece on the selection of greasy shorts soon, but I wanted to begin by reporting on the kick ass feature THE IMPALERS.

The film screened with a couple of short films. The first was a fake trailer called SQUIRT ALLEY about a good girl by day who was an evil demonic succubus by night. It was rude crude and extremely funny. 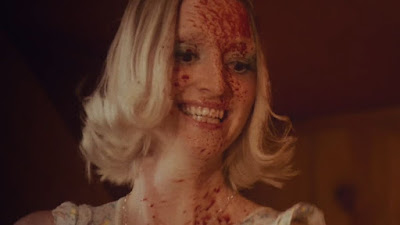 The second was called XTERMINATION. It begins with a woman using a shot gun to kill a little bug and then having the whole thing go horribly wrong and turn into a shootout. I won’t pretend to get it all but I laughed my ass off. 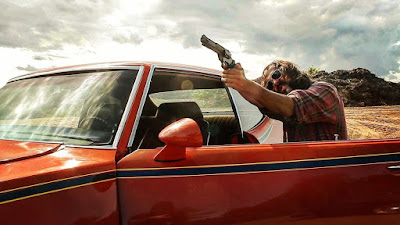 THE IMPALERS is a low budget action film full of gallons of blood splurting like a fire hose and seeming unending violence. The plot has something to do with a guy named Kolovosky who ends up on the run from bikers, the mob and Russian spies. I’m not entirely certain of all that happens since part of the film was in unsubtitled French, but I had an absolute blast watching it unfold.

What I loved about the film is that its clear that everyone on screen is having a good time and it bleeds off the screen. We enjoy watching because they are having fun. Additionally everyone isn’t over doing it. Yes this is a low budget film but no one is intentionally playing it for laughs, the result is we are more willing to go along with it.

As I was watching it all I could think was how much better this would have been in a crowded theater or with friends in a living room with everyone going along, talking to the screen, laughing and reacting. This is the sort of film that perfectly illustrates why movie going is not a solitary act, but a communal one. This is a film that needs a large audience in one place all together for it to work.  While THE IMPALERS is a perfect drive-in film that’s not the place to see it. The perfect place in a pack theater late at night, preferably at a festival like Cabane à Sang where like minded people can come together to watch a glorious balls to the wall action film.

Have I said how envious I am of anyone who got to see this in a theater? It must have been a blast.

IMPALER is a gloriously ragged work of art. That is allowed itself to world premiere at this year's Cabane à Sang indicates that the filmmakers know their audience. They understand the people who need to see this so that it can explode the minds of people so they make this a cult classic that people can watch together (that sentence only makes sense if you've seen the film)

Highly recommended for those who can see it in a crowded theater or in a living room with friends and beers and whatever else.