The Mahoning Drive-In Theater's screening of DAWN OF THE DEAD was.... disappointing 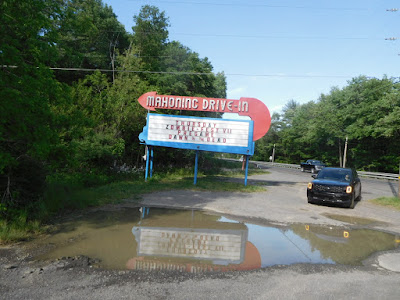 Built in 1947 and welcoming visitors since 1948, The Mahoning Drive-in has become legendary in the last few years since it decided it couldn't afford to convert to digital and it would struggle forward as a retro drive-in and only running 35mm films. Everyone thought it wouldn't work but the  move was a success and the theater has carved out a niche showing various series ( say the recent Zombie Fest which is in its 7th year) and having special events (Joe Bob Briggs will be there for several days in July). And while the theater won't put it forward, they have been successful enough that they now have a digital projector. 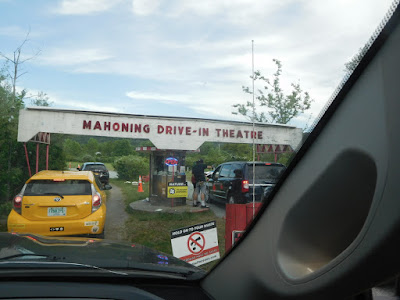 My brother Joe and I have been aware of the theater for a while now but we just didn't get there until this past week when they ran a 4K restoration of the original DAWN OF THE DEAD.  DAWN is Joe's favorite film. He has loved the film ever since we saw it at the Westbury Drive-in on the original opening night. With stars Gaylen  Ross and Scott H Reiniger being there we had to go. 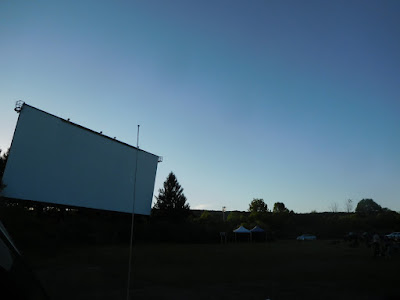 The theater is an absolutely huge screen  on the edge of a field in the middle of a rural area, There is a snack bar/projection booth in the middle of the field looking like it was randomly dropped in the middle of a field.  Forward of the front row is a small shack that I believe is where the digital projector is. You feel more like you are on a farm than in a theater. It makes for a one a kind viewing experience that makes it feel like being at a fiends house.

When we arrived we parked on the front row to one side and then went off to look around. 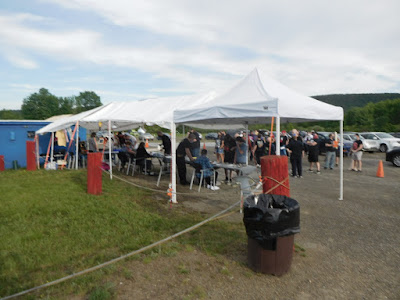 Ms Ross and Mr Reiniger were signing at a tent next to the snack bar. The lines to meet them were very long all evening as people went up to get signatures and photos. They and the people meeting them were very nice.
Joe and I watched people cycle through the signing lines for a while  and then wandered off hoping it would die down and we could slip in and get an autograph. (it never did). We bought some raffle tickets then went to the snack bar for  a dinner of burgers, fries, chicken fingers, and mozzarella sticks. We spent the rest of the evening talk between us and the gentleman next to us who looked like our Uncle Alan but had driven up from Florida for the weekend. 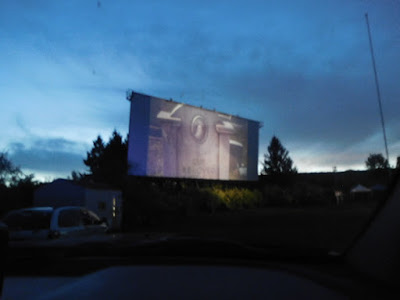 Before the film they ran a reel of 35mm George Romero zombie film trailers. They ran trailers for all the films in the series except for that nights films. They also ran the trailers for Tom Savini's NIGHT OF THE LIVING DEAD and Zack Snyder's remake of DAWN.

And then it was show time....and it was just okay. While DAWN remains a classic the presentation was less than optimal.

I don't know why but the projector bulb used for the projection of  DAWN OF THE DEAD was woefully dim. It was so bad during the first half of the film that many darker  sequences were almost devoid of detail.
How devoid? When the zombie bites the woman in the hall way and you see the flesh rip away, but it was invisible in shadow. When the one legged priest comes out of the room with the dead we couldn't see that his leg was a crutch. Any daylight sequences looked like they were shot at night.
It was so bad  that much of Joe's conversation was focused on the technical issues of just how off the illumination was.(He was going into great detail about how off it was and what the correct ratio of projector light to ambient light should be) It bothered him so badly that he got out of the car and walked around the drive in to see if it was simply a problem with the angle of where our car was, It was not,

Yes in the second half the image magically improved, but it still was not bright. It was almost as a bright as the trailer reel which seemed a bit dim itself (though in fairness the sun still hadn't fully set).

Both Joe and I were disappointed. Admittedly part of the reason for our disappointment is the result of seeing the April Ghouls at the Riverside Drive-in about four weeks earlier. There, the images were sharp and bright, even in a rain storm. (With rain predicted for the next three nights of Zombie Fest I don't want to think about what the images looked like.) 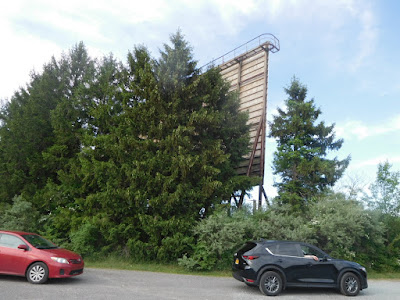 Would be go to the Mahoning again? Yes. But it would depend on the movie, and it would depend if it was listing as digital. I don't want to risk seeing a digital film at the theater.

I should point out that one some level I don't know how many people cared. I have no clue how many were there to see the movies and how many are there to just hang out. A large number of filmgoers seemed to know each other and be there more for a social outing than the film. In many ways this seemed to be more a party than a film screening. Being some one who love film as a social event I am all for it. However this time out I was there for the film and it was disappointing. 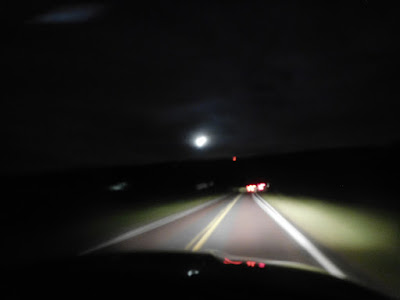