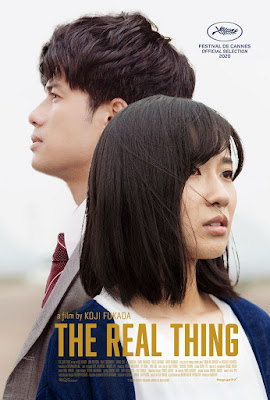 This is the story of Tsuji, a young toy company salesman. He is carrying on with two of his co-workers. However as fate would have it he runs into Ukyio, a curious young woman who he rescues wen her car stalls on a train track just before a train is set to come roaring through. He thinks he is done with her but little does he suspect that the meeting is going to lead to more meetings and crazy adventures that may bring them closer together if it doesn't kill them first.
Koji Fukada takes a break from thrillers and turns his gaze to romance. Based on a best selling manga, Fukada made a ten part TV series. He then recut it into a four hour film. I have not read the manga so I don't know how faithful it is. And I have not seen the full version I mention this because my feelings toward the film are tied up in a feeling that something is missing.
Before I go any further I want to say that THE REAL THING is a good film. I genuine like it- hell I watched it in one four hour block not long after t was sent to me. I point this out because when I agreed to review it I said that the review might be late because I didn't know if I could sit for four hours. I thought I would have to break it up, instead I watched it in one go, staying up way past my bed time.
That said the film has some issues that are no doubt the result of cutting out 60% of the story. The first thing that I bothered me about the film is that there is a sense that something is missing. There is a sense that some threads have been shortened. Most telling is that is I felt the development of Ukyio seems lacking. Even after following her for four hours I still don't understand why Tsuji is so obsessed with her.
The second problem is that despite being recut as a feature, the film feels like we should be taking a couple of breaks in the middle. There were a couple of times where I had a sense that there would have been a break.
I'm kind of amused by this film because it doesn't feel like a Koji Fukada film. Its a workman like one which is fine but it's more a footnote piece from a great director. Then again it might be of interest for that reason alone..
While not perfect, if you're curious THE REAL THING is worth a look.
Posted by Steve Kopian at June 01, 2021