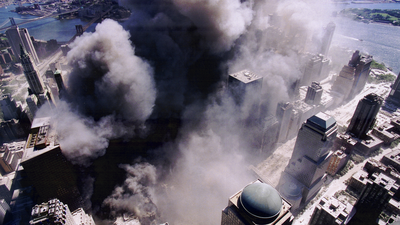 I don't like to revisit 9/11.  I tend to avoid the films because I was so deep into it for a while that I don't want to go into the blackness. Basically once I wrote my piece I put it all aside. Despite that I still end up watching the films accidently. As with all the other accidental films I've seen I ended up watching this latest recounting of the events from two decades ago. Sadly I was disappointed.

This is yet another recounting of the events of September 2001. Based on what I've seen of this series the problem is that other being a new assemblage there isn't a lot we haven't seen before. While not bad, and while it puts everything in one place, this is the least necessary recounting of events that I've seen