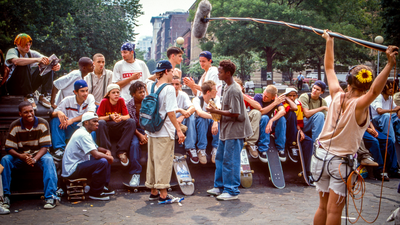 Actor Hamilton Harris and other people connected to Larry Clark's infamous KIDS talk about their lives before the film, how that influenced the movie and what happened afterward.

One of my most looked forward films for this year's Tribeca was this look at a film which still rattles cages. The festival very often schedules great films on film that put films and filmmakers into perspective. I was hoping that I would get some context so that I could understand what people see in KIDS, a film whose wonders have always eluded me. Sadly it didn't happen.

While THE KIDS explained where the film came from and the section of society that spawned it, the film never made me care. The film kept me at a distance. Yes, the film put everything into context but any emotional connection never happened. I was so disappointed I went ftom wondering why KIDS connected to so many people to why would anyone want to see a film about it 25 yeas later.

While never bad, this is a film that's going to be best for fans of the original film.