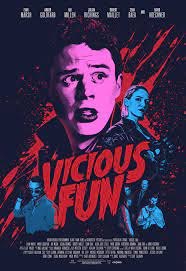 Obnoxious film critic finds himself at a support group for serial killers and has to find a way to survive.

Amusing and fun horror comedy, probably would have worked best as a 15 minute sketch. While the film is funny and has a cast that is literally to die for, the things feel a bit stretched out to 103 minutes. As fun as things get, the film is often very clearly a construct and is very intentionally set up jokes and one liners. You can see the cast reaching for objects or doing things not because they make sense but simply because it allows for a pithy ne liner (our hero goes out of his way to grab a phone to hit someone just so he can say "here's your one phone call")

I liked the film a great deal but I wanted to love it.

Worth a look as part of Shudder's service.