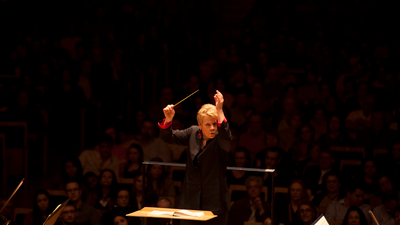 Marin Alsop broke the glass ceiling in regard to who can be a conductor of a symphony orchestra. Despite being told  she couldn’t be one because she was a girl she persisted and eventually became a student of the great Leonard Bernstein.

I loved this film. I loved listening to Alsop tell her story. I loved watching her spread he love of music by teaching kids about music. Basically I was delighted at every turn.

I know this isn’t a deep meaningful review, but I don’t think this is the type of film that needs one. This is a big bear hug of a movie  that as a music and film lover that you slip into and are carried along.

It’s a glorious portrait of a woman you’ll want to hang out with and talk to for hours.

This film is a joy and highly recommended.

One of the unexpected gems of Tribeca